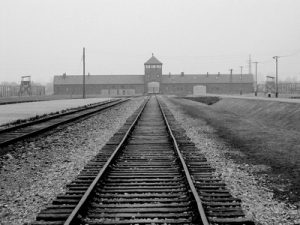 The duration of this orchestral poem is 6½ minutes. It starts with brass and drums setting the serious tone of the topic, and gaining the attention of the listener. A series of ‘scenes’ then appears depicting a generally normal way of life before the Nazi terror started. An intrusive march is heard, illustrating the developing military menace. A lovely yet sad oboe tune reminds us of the final years for the doomed European Jews. The weariness of displaced and persecuted Jews is felt next, and then a tension is heard in a superficially playful tune. It is all interrupted by the return of the military march. Six gong sounds represents the some 6 million Jews killed by the Nazis in the Second World War. The lovely tune returns in a poignant form to remind us of their unimaginable and unspeakable suffering. But then, a rousing fanfare changes the mood to a proud and positive one. A triumphant march of the Jews is played, and the piece ends on powerful brass chords and fanfares.

© This music is the copyright of Keith M.T. Hearne.